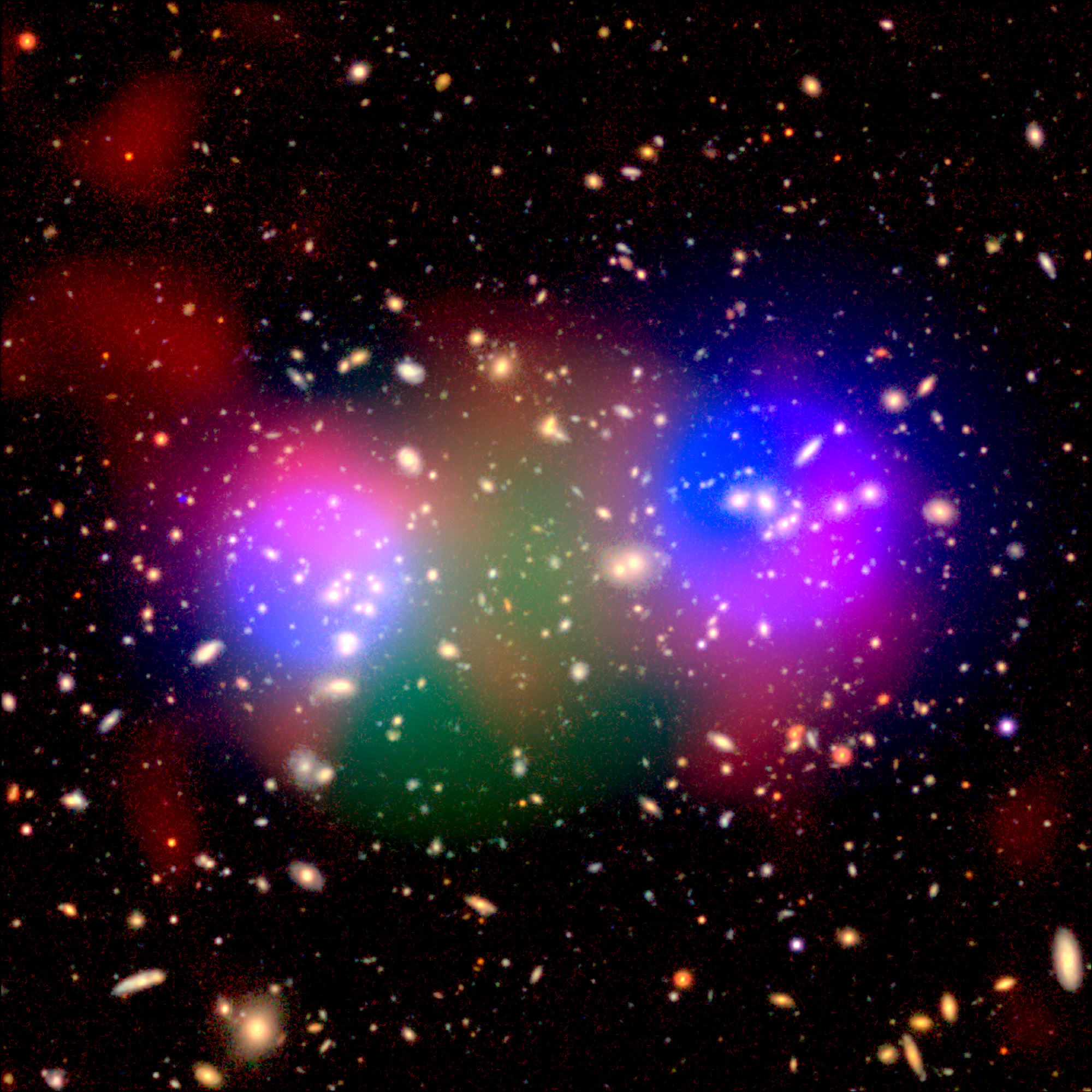 This burst of colours shows a galaxy cluster acting as a cosmic furnace. The cluster heats the material at two hundred millions degrees Celsius. The cluster lies four billion light-years from Earth and was detected by XMM-Newton via the international XXL survey, which is exploring two large areas of space outside our galaxy. 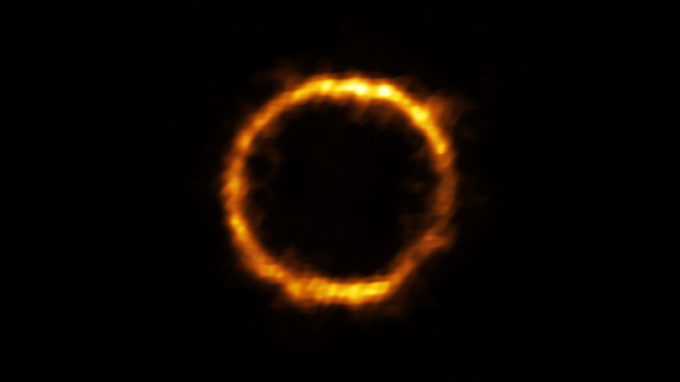 SPT0419-47 is an extremely distant galaxy that could be mistaken for our own Milky Way. The ALMA ground-based radio telescope, equipped with Media Lario’s light-weight laminated metallic panels, allowed the astronomers to observe this galaxy 12 billion light-years far from Earth. It is surprisingly unchaotic, thus contradicting theories that all galaxies in the early Universe were turbulent and unstable. 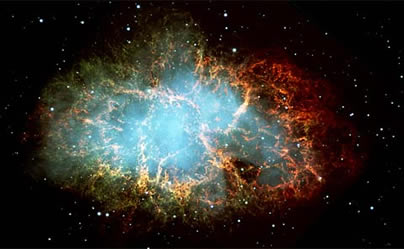 The Crab Nebula (Messier 1) is the supernova remnant (SNR) in the year 1054. Observed with the MAGIC telescope, equipped with Media Lario’s light-weight mirrored panels, the nebula consists of the material ejected in the supernova explosion, which has been spread over a volume approximately 10 light years in diameter and is still expanding. The Crab Nebula has a very bright emission. The intensity of this emission is the highest at the center. 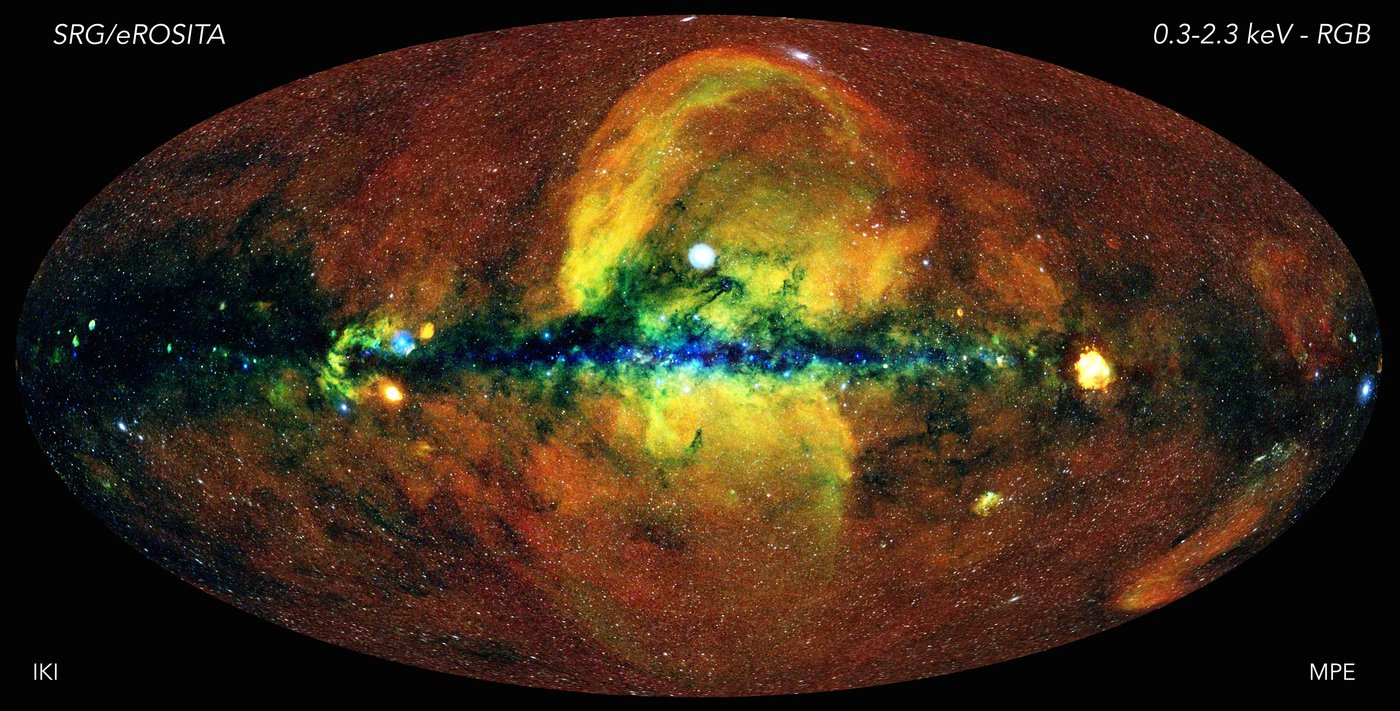 The First All Sky Survey in X-Ray

This first all-sky survey is the result of the latest eROSITA observation campaign conducted over a period of six months. The whole sky is projected onto an ellipse with the centre of the Milky Way in the middle and the body of the Galaxy running horizontally. The red diffused glow away from the galactic plane is the emission of the hot gas in the vicinity of the solar system (the Local Bubble). Along the plane itself, dust and gas absorb the lowest energy X-ray photons, so that only high-energy emitting sources (in blue) can be seen. The hotter gas close to the galactic centre (in green and yellow), carries imprinted the history of the most energetic processes in the life of the Milky Way: supernova explosions, driving fountains of gas out of the plane, and, possibly, past outburst from the now dormant supermassive black hole in the centre of the galaxy. Among the hundreds of thousands of X-ray sources, distant active galactic nuclei are visible as point sources, while clusters of galaxies reveal themselves as extended X-ray nebulosities. In total, about one million X-ray sources have been detected in the eROSITA all-sky image, a treasure trove that will keep the teams busy for the coming years. 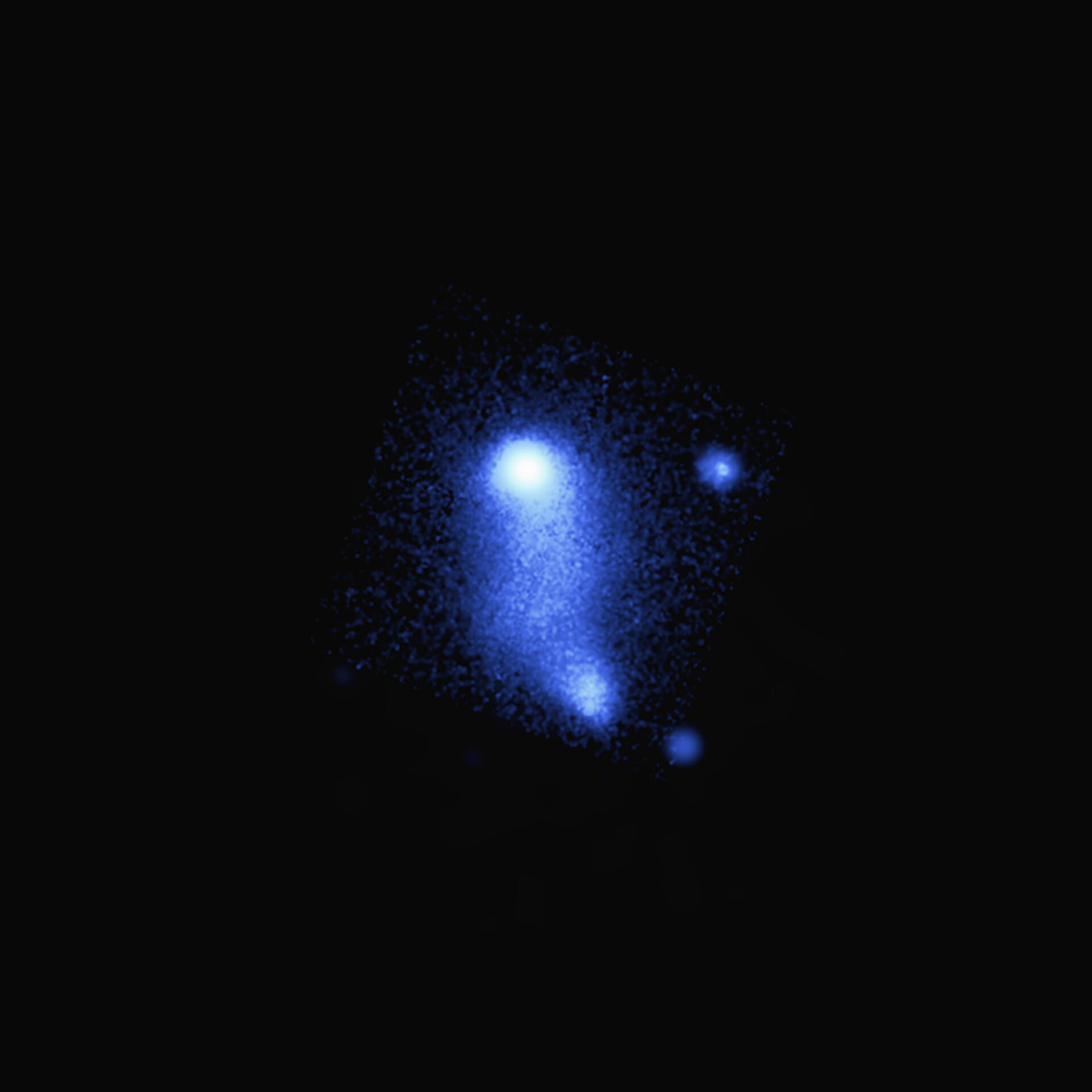 A Bridge Between Galaxy Clusters

This image is the overlay of X-ray observations obtained with XMM-Newton and Chandra, radio wave observations captured by the Giant Metrewave Radio Telescope (GMRT), and optical data from the Digitized Sky Survey. This image shows the collision of two galaxies of the Abell 2384 System. After collision, the galaxies passed through each other releasing a flood of hot gas from each cluster that formed an unusual bridge between the two objects. 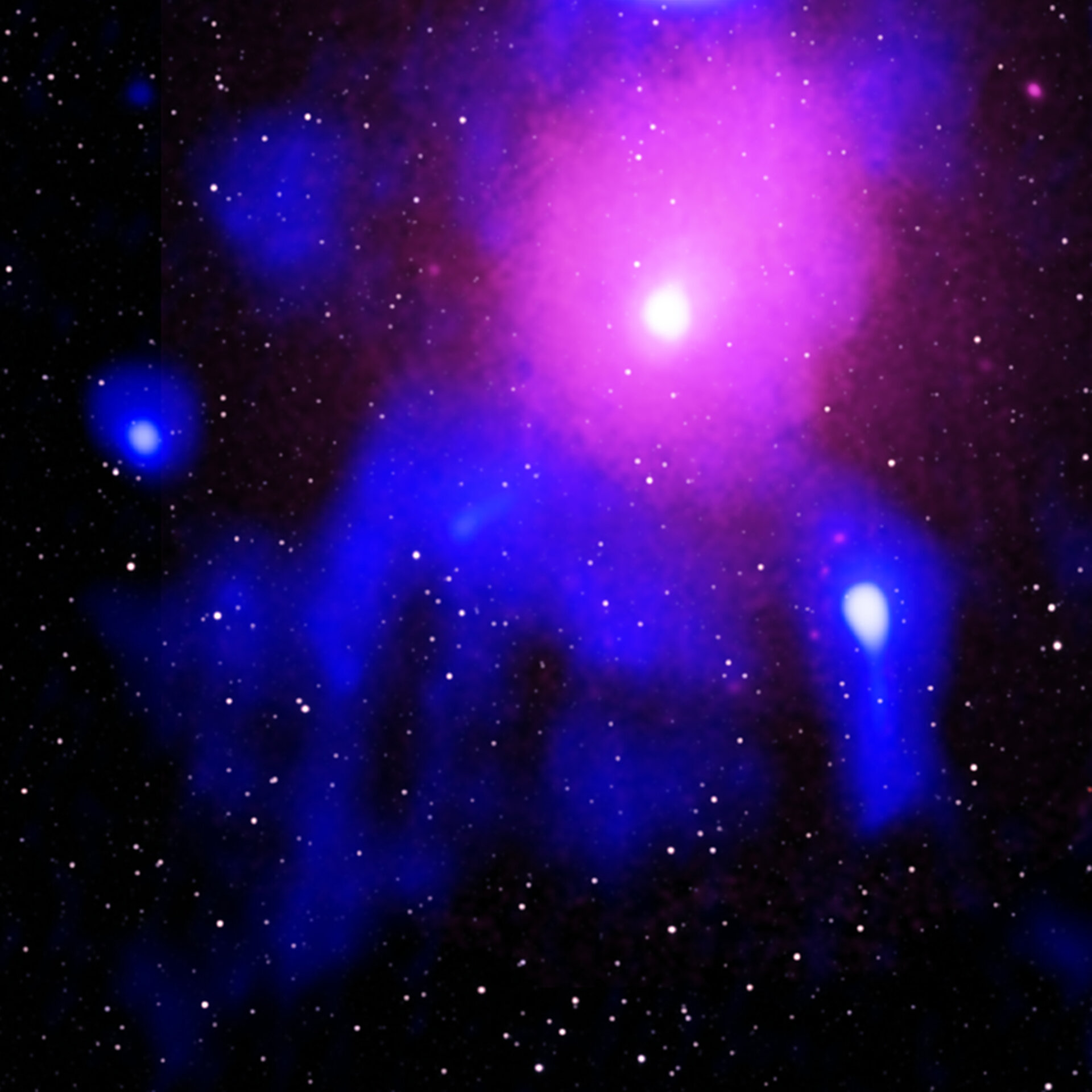 The Most Powerful Black Hole Eruption in the Universe

The aftermath of the most powerful explosion ever seen in the Universe has been captured by the astronomers using ESA’s XMM-Newton and NASA’s Chandra X-ray space observatories, along with radio telescopes on ground. This image is the overlay of observations from XMM-Newton, Giant Metrewave Radio Telescope (GMRT), and data from the 2MASS survey. This image shows the diffused hot gas pervading the cluster. 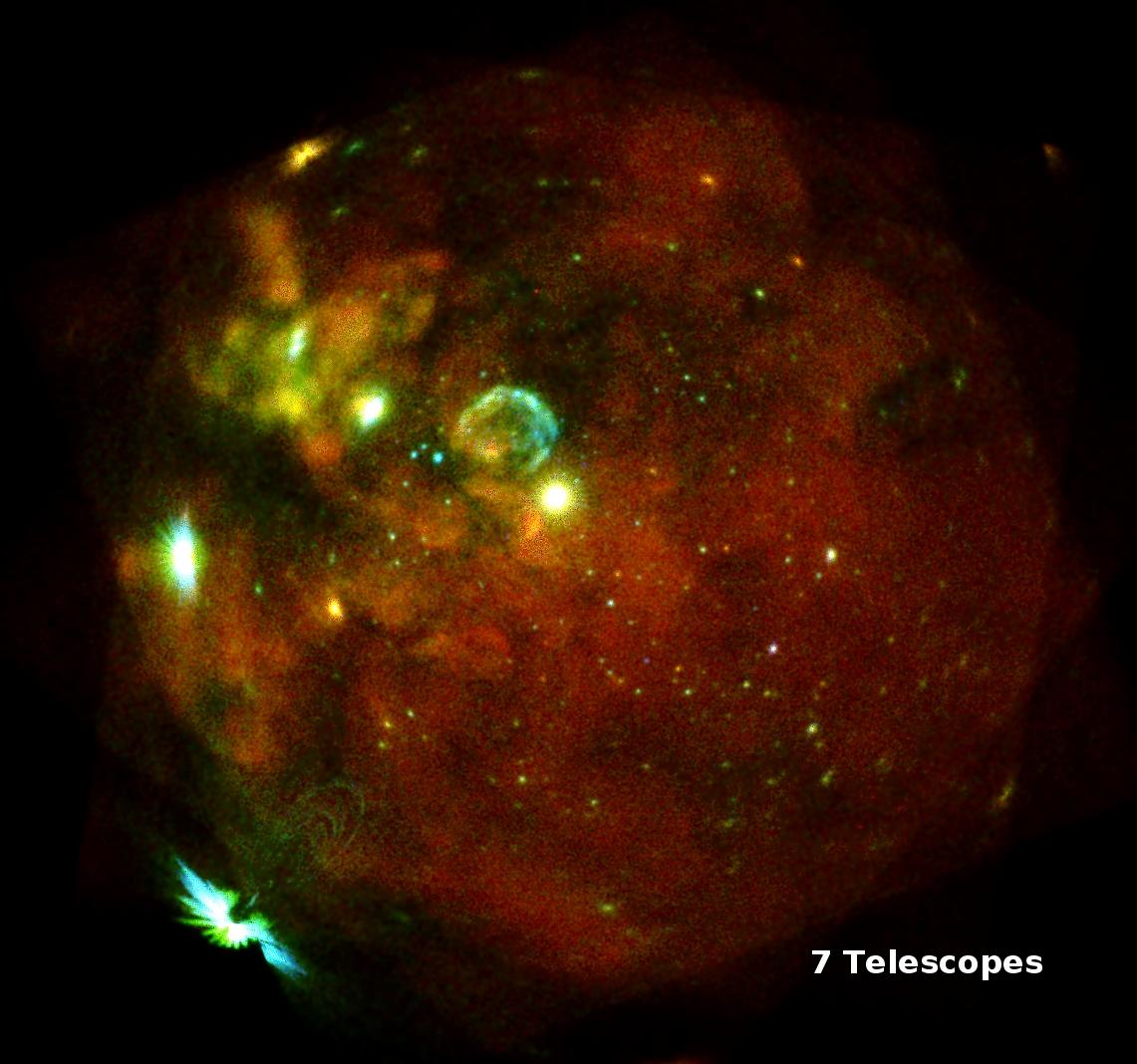 This image shows a neighboring galaxy of the Solar System, the Large Magellanic Cloud (LMC). The diffuse emission originates from the hot gas between the stars. It was observed by the eROSITA telescope with several image acquisitions performed between 17 and 20 October 2019. The eROSITA is a high-resolution X-Ray Space Telescope, launched in July 2019, and will further scientific understanding of the history of the universe by mapping it in the X-Ray band during its four-year search for dark matter and dark energy. It is also the latest in a long line of X-Ray telescopes to be built with Media Lario optical technology. Indeed, its seven optical modules are composed of 54 RepliFormed™ mirrors supplied by Media Lario. 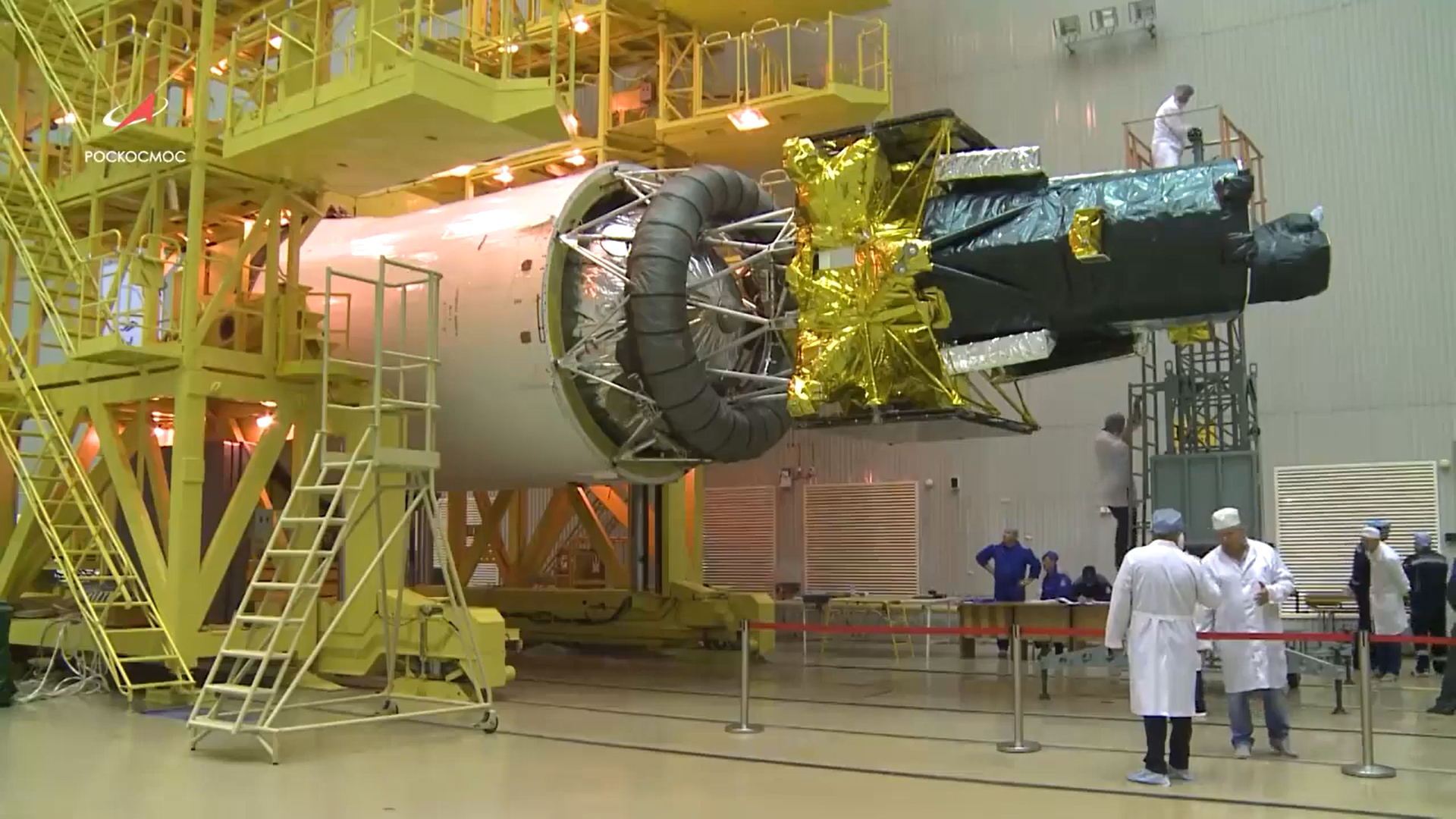 Preparation for Launch of the eROSITA X-Ray Space Telescope

eROSITA is the main playload of the Spektrum Russian-German (Spektr-RG) mission. Successfully launched on 13 July 2019 from the Baikonur Cosmodrome, eROSITA has provided the first all-sky survey in the medium X-Ray range. Media Lario supplied the 7 optical modules of the X-Ray telescope. Each optical module consists of 54 nested mirrors, with high-precision Wolter I shape, produced with our patented Repli-formed Optics™ technology. This image shows the assembly of the Spektr-RG Space Observatory, including eROSITA telescope, on the Proton-M head at Roskosmos facility in Baikonur. 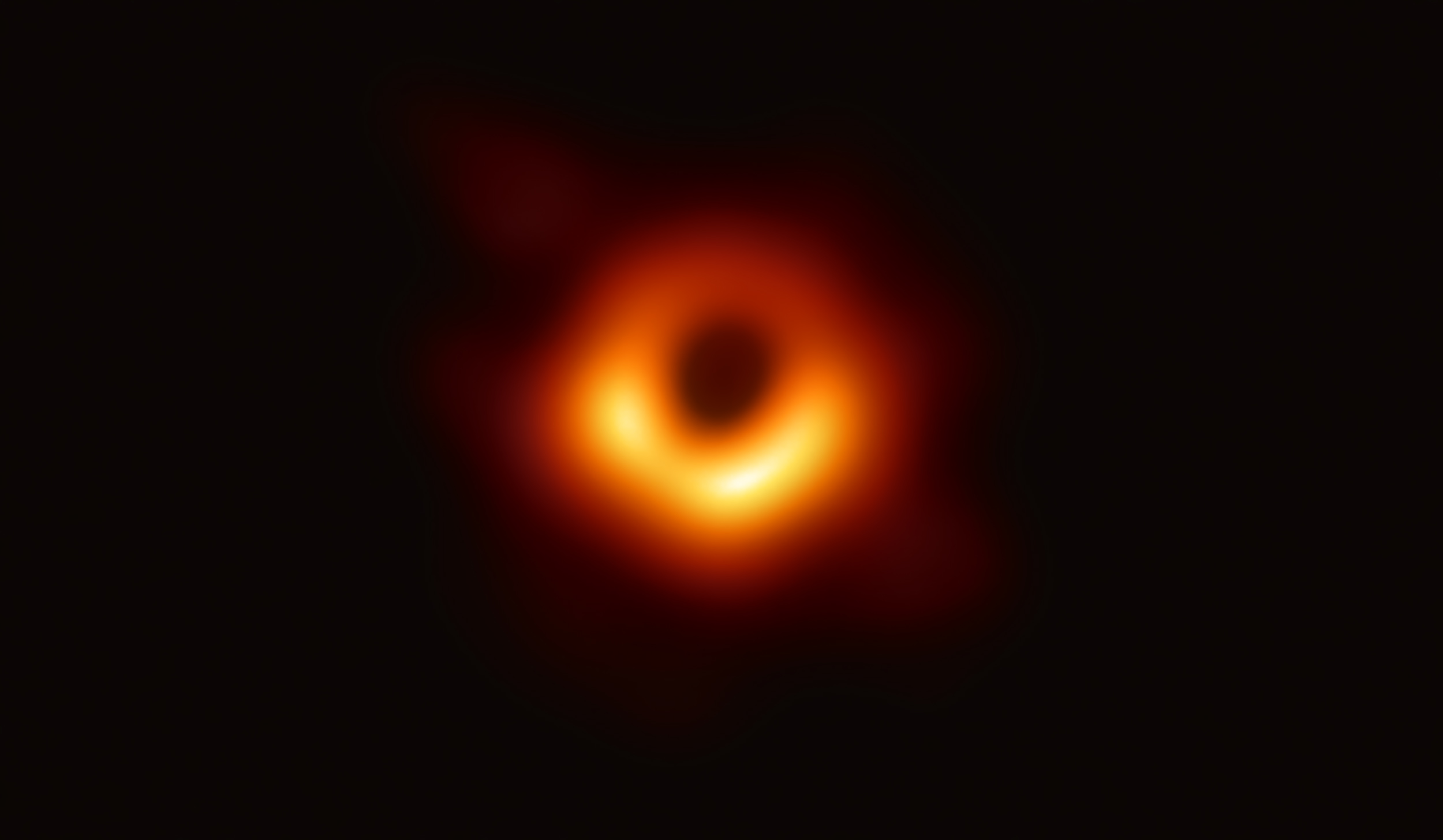 First Ever Image of a Black Hole

Scientists have obtained the first image of a black hole using Event Horizon Telescope observations of the center of the galaxy M87. The image shows a bright ring formed as light bends in the intense gravity around a black hole that is 6.5 billion times more massive than the Sun. This first-time image provides the strongest evidence to date for the existence of supermassive black holes. The image of a Black Hole was obtained linking several ground-based radio telescopes and arrays, forming an Earth-sized virtual telescope with unprecedented sensitivity and resolution, including the observatories ALMA and LMT. 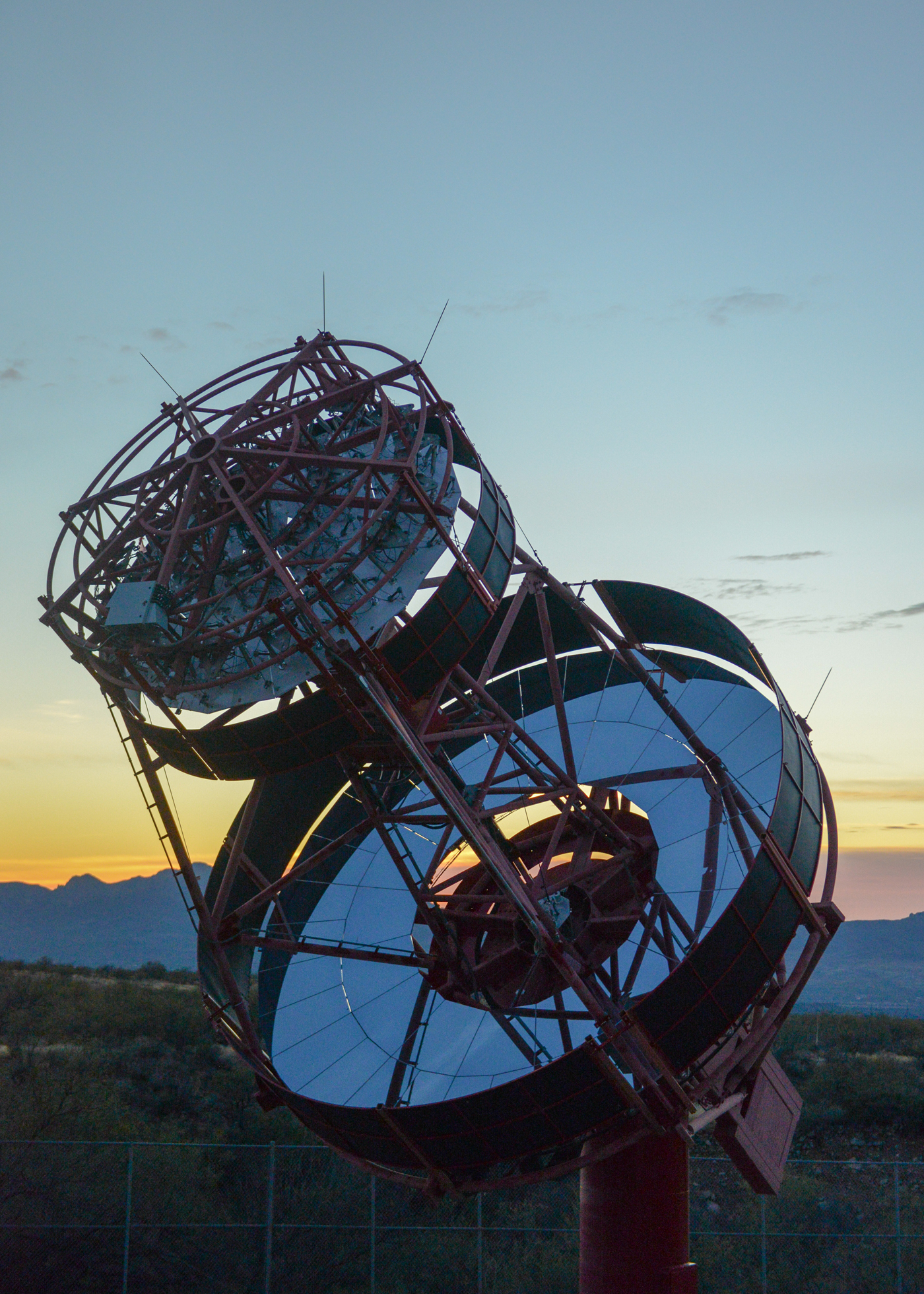 This image shows the prototype Schwarzschild-Couder Telescope (pSCT) on-site at Fred Lawrence Whipple Observatory. This telescope will serve as a pathfinder medium-sized telescope (MST) for Cherenkov Telescope Array (CTA). The MST array of SCTs in CTA is expected to significantly improve the angular resolution and dramatically improve the off-axis sensitivity of the observatory when compared to an MST array of conventional (VERITAS-like) Davies-Cotton Telescopes (DCTs). 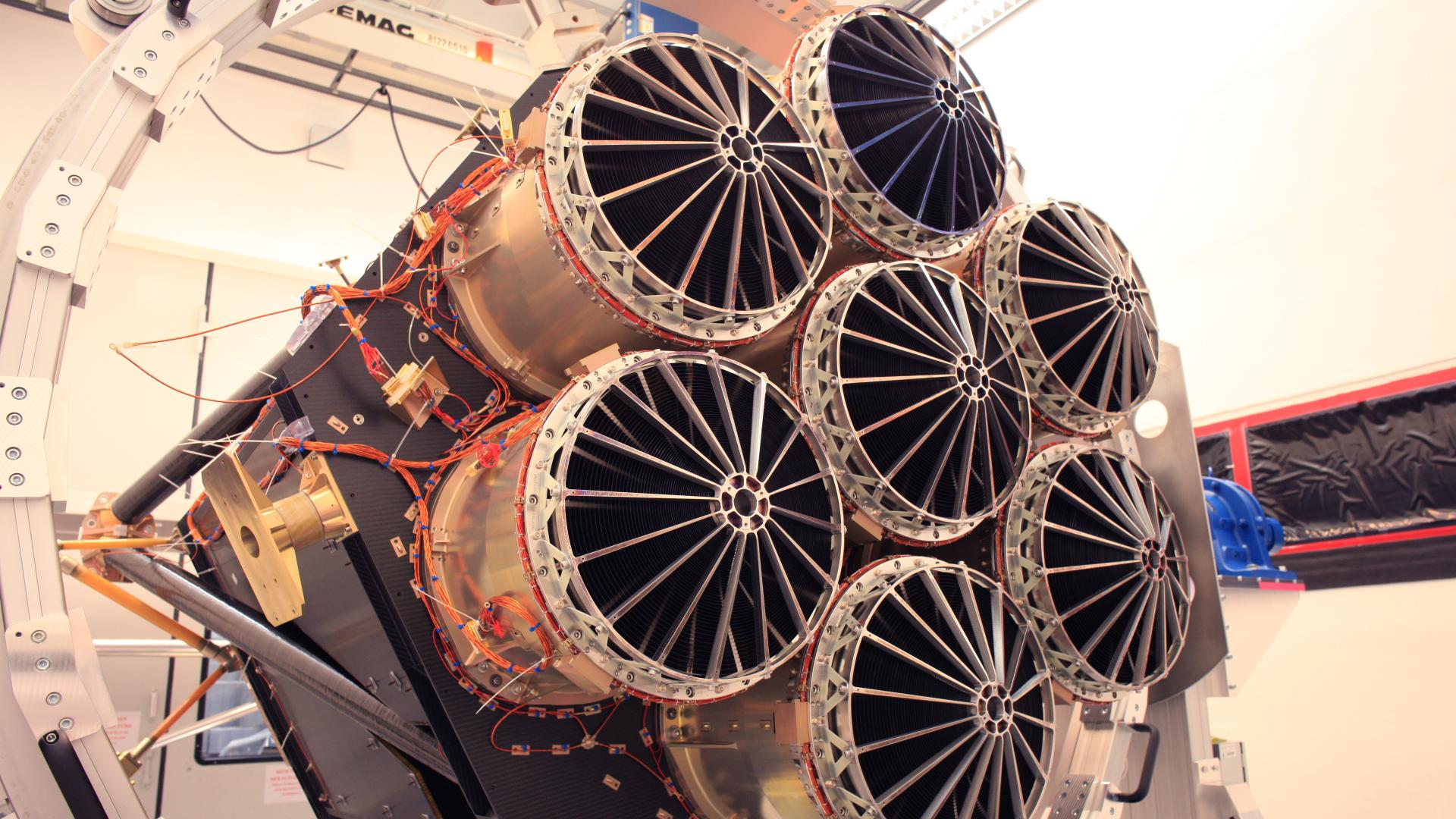 Assembly of the eROSITA Optical System

This picture shows the optics of the X-ray eROSITA telescope of Max Planck Institute for Extraterrestrial Physics (MPE). Each of the 7 optical modules produced by Media Lario consists of 54 nested mirrors, with high-precision Wolter I shape, manufactured by our patented Repli-formed Optics™ technology to collect and focus high-energy photons onto the X-ray cameras. eROSITA is the primary instrument on-board the Russian-German "Spectrum-Roentgen-Gamma" (SRG) mission which was successfully launched from Baikonur on July 13, 2019 and placed in a halo orbit around the Lagrange 2 point. eROSITA has performed the first imaging all-sky survey in the medium energy X-ray range up to 10 keV with an unprecedented spectral and angular resolution. 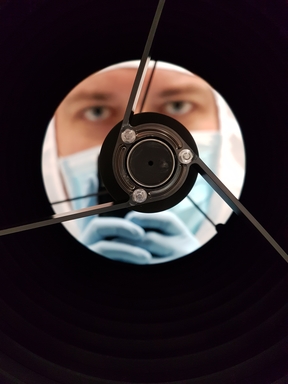 Assembly of the CHEOPS Exoplanet Telescope

CHEOPS is ESA's CHaracterising ExOPlanet Satellite. It is the first mission dedicated to studying bright, nearby stars that are already known to host exoplanets, in order to make high-precision observations of the planet's size as it passes in front of its host star. In this picture, the face of an integration engineer is reflected by the telescope’s primary mirror. At the center of the image, there is the secondary mirror held in place by its 'spider' support structure. 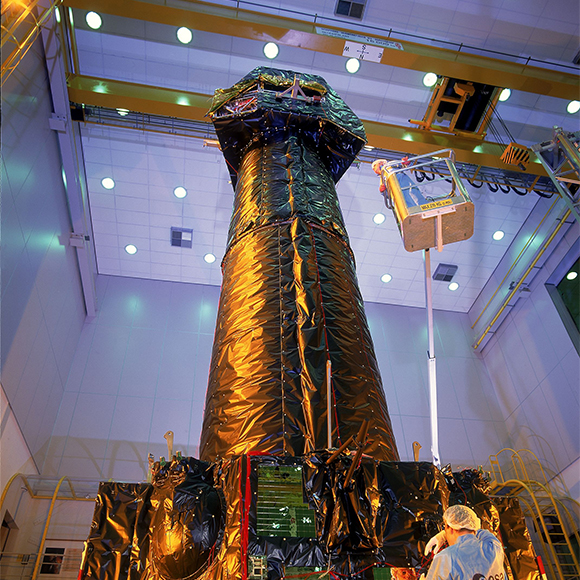 Preparation for Launch of the XMM-Newton X-Ray Space Telescope

The XMM-Newton (X-ray Multi-Mirror Mission), launched in December 1999, is one of the most powerful X-ray space observatories ever. The telescope carries three high throughput X-ray optical modules with unprecedented effective area, and an optical monitor. Media Lario supplied the three X-ray optical mirror modules, composed of 58 nested mirrors of Wolter I design produced with our patented Repli-formed Optics™ technology. This image shows the solar array deployment test of the XMM-Newton spacecraft at ESA ESTEC facilities.